As we got the bus into Christchurch from the airport last Monday, and then walked the couple of blocks from the bus stop to our hostel past large expanses of gravel and rubble, we wondered how long we could keep ourselves entertained in such a city. In every direction lay a damaged building, or a building-sized hole, and the skyline was dominated by cranes and pile-drivers. 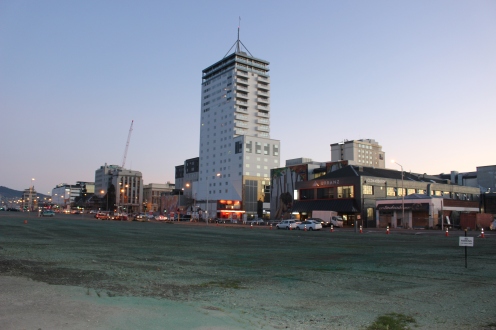 All around Christchurch are large empty spaces.

On Sunday morning we walked from our hostel, which would have been considered city centre accommodation six years ago, past the gravel fields, to watch the Christchurch Marathon. We positioned ourselves at the finish line, in the shadow of the wreckage of ChristChurch Cathedral. The crowds were enthusiastic but fairly feeble for a city marathon. Now though, after six days, after reading and hearing more about the earthquakes that laid waste to the city five years ago, and after experiencing the rebuilding efforts and post-quake culture, we felt more affection for the city.

The most deadly earthquake occurred on February 22nd 2011, at 12.51pm, and resulted in the deaths of 185 people. The damage was most severe in the city centre, within ‘the four avenues’, due to the high-rise buildings and dense population. Around 70% of buildings in the area were either destroyed by the quake, have since been demolished or are due to be demolished. The rebuild is still in the early stages; there are construction sites and tradesmen everywhere one looks, but as yet no major completions or reopenings.

Perhaps the most startling thing about the city is how quiet it is. A huge proportion of the population was displaced by the earthquakes, and has not yet been able to return, and there is not yet enough going on in the centre to draw large numbers of commuters or shoppers. On Friday night we went out for a drink, and found few places in the city centre with more than a handful of customers. Even on marathon day on a bank holiday weekend (courtesy of the Queen’s birthday), when we wandered a couple of blocks away from Cathedral Square the city was eerily quiet. 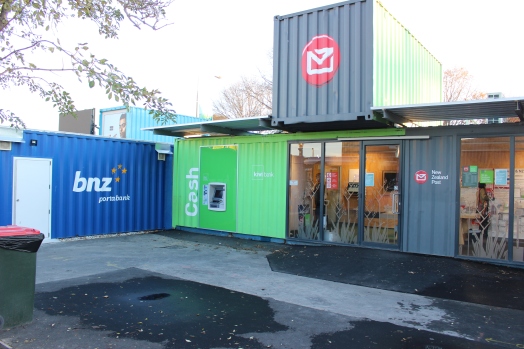 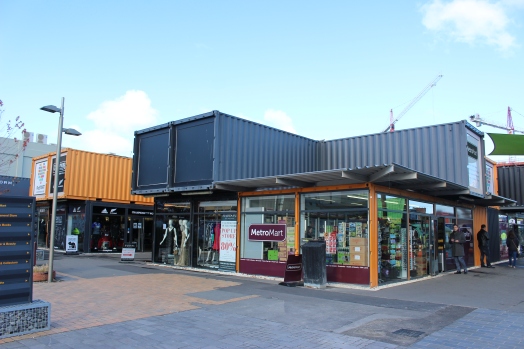 There are pockets, however, where the city shows real spirit. The Re:START mall was an initiative begun in October 2011, just seven months after the quake and with aftershocks still being felt. With the aim of encouraging people back into the city, a shopping centre was built out of shipping containers. It now houses over 50 businesses and includes a food court, banks and a post office. Buskers play throughout the day and there is a lively buzz around the place. When we went into Kiwibank to open an account the staff told us how attached they were to their container home, and hoped that, when development finally starts there, the mall could be relocated rather than disassembled.

Over the road, the Quake City museum describes the devastation, but also shows the resilience and rebuilding. An hour-long film shows interviews with survivors. It is tragic and moving, but also uplifting and at times amusing. There is a toilet exhibit: with the sewage and mains water systems destroyed (‘munted’, to use the mayor’s description), alternative facilities were necessary, and a competition was born. There are some bottles of Aftershock Beer, created when a power outage caused by an aftershock led to a higher alcohol percentage – 7.1, the magnitude of the 2010 quake. The sale of Aftersocks, featuring a seismic wave motif, helped raise relief funds.

Other projects around the city have sought to make temporary use of the vacant city centre land. Public art installations are abundant; a ‘discomat’ has been created in one large outdoor space, where, after putting some coins in the washing machine, you can plug in your mp3 player and have a dance under the disco ball; the Christchurch Transitional Cathedral, dubbed the Cardboard Cathedral, is a temporary replacement for the damaged original, and features cardboard tubes and shipping containers in its design.

There are memorials to the dead, of course. An art installation consisting of 185 white-painted chairs of every kind, from highchairs to wheelchairs, sits opposite the site of the Canterbury Television building, the collapse of which was responsible for 115 of the deaths. All that is left of the building is three parking spaces, now incorporated into a memorial garden. But Christchurch, from the days and weeks after the quake up to the present day, has been all about the future. Residents are more than happy to talk about the earthquake, but tend only to do so when asked.

185 Chairs, representing the 185 deaths in the February 2011 earthquake 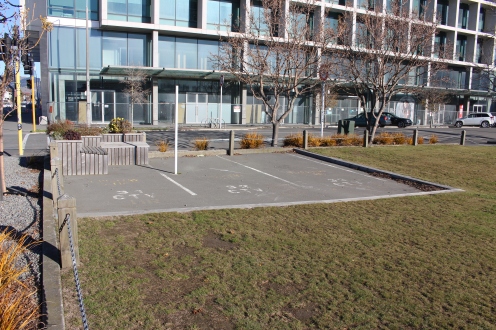 Three parking spaces, all that remains of the CTV tower.

We have been reading Old Bucky & Me, a book of dispatches, dictated initially and later written, by Jane Bowron, a journalist caught up in the February 2011 earthquake. For 12 months she sent reports of everyday life in post-quake Christchurch. She writes about the 6.30pm curfew, imposed by the army to prevent looting; about joining with neighbours she had barely spoken to before to devise means of collecting rain water, build barbeques out of rubble and get drunk with after a severe aftershock; about the apartment buildings whose sides had fallen away revealing two huge marijuana plants in someone’s living room. It is a brilliant read.

We have stayed in Christchurch longer that we might have had it not been our first port of call in New Zealand. There is not an awful lot to see, from a tourist perspective, other than the earthquake damage. While here we have set up a bank account, got New Zealand mobile numbers and bought and started kitting out a campervan and, in the meantime, thoroughly enjoyed spending time in the city.

All being well we are leaving tomorrow, and will spend the next couple of weeks driving around in our campervan looking for work, in true Steinbeck fashion, starting in Acaroa, just south of Christchurch.