Following a period of blog silence, we have been inundated by a request for an update. More to follow shortly now that we are settled in one place for a couple of months, but here, in brief, is what we have been up to for the last seven weeks.

After a week in Christchurch we picked up Sam, our 1997 Toyota Estima with campervan pretensions, and drove South to Banks Peninsula. We spent our first night camping in a caravan graveyard at Pigeon Bay, one of the many narrow bays which encircle the peninsula, accessible by long, rough, gravel roads. We spent three nights on the peninsula, doing some short walks and driving roads justly described by Lonely Planet as ‘absurdly beautiful’. 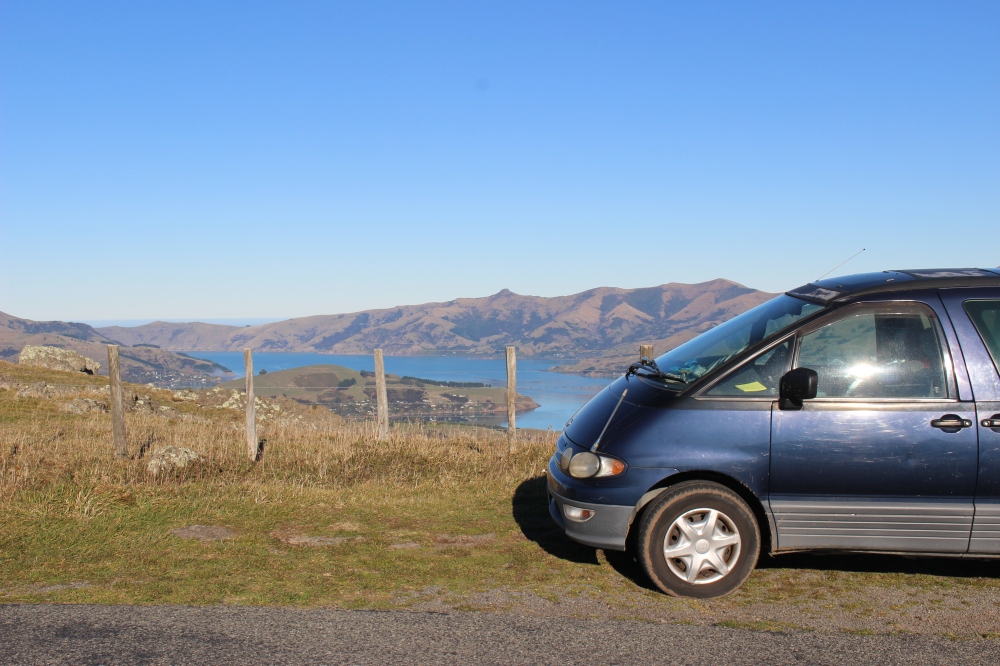 We then drove down the coast and camped just north of Timaru, before turning inland. Our next stop was Lake Tekapo, clear blue with Alpine views, where the large glass window behind the altar of the tiny church must serve as both a draw and a distraction. We did a couple of short walks, and spent a very windy night by the shore of neighbouring Lake MacGregor. 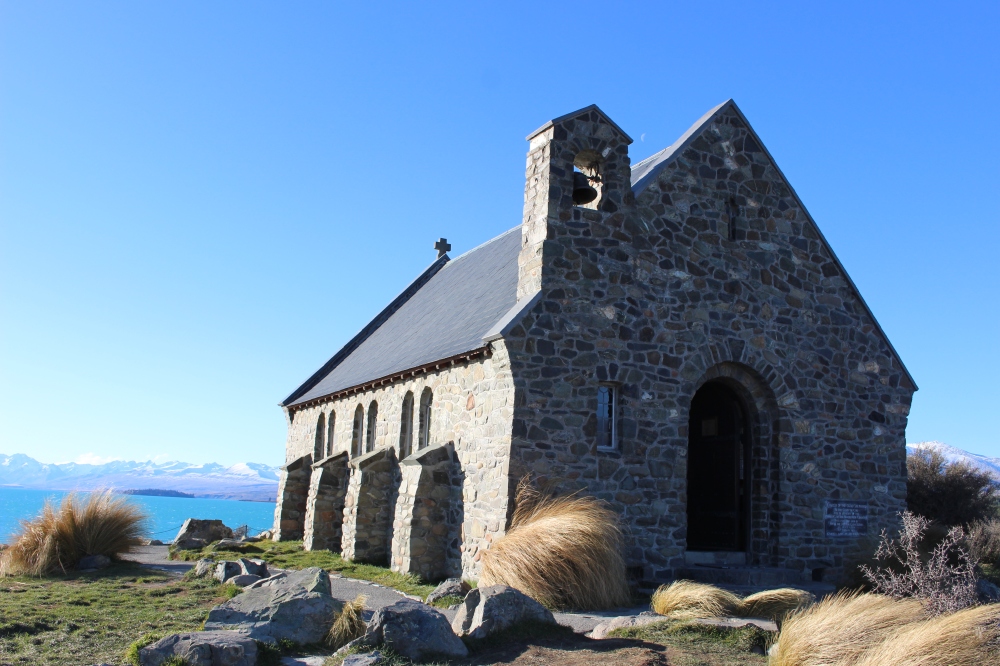 The next week was spent in Wanaka and Queenstown, New Zealand’s two main ski towns, where our job hunt began in earnest. There is no better place than Wanaka to sit in lakeside bars and cafes waiting for Skype interviews only to be repeatedly stood-up. On the Friday of our third week in New Zealand we were offered the job we started last week, giving us four weeks to continue exploring and work our way up to the North Island.

The next night we were in Cromwell, the first of several gold rush towns we visited in Central Otago. There we watched the second test of the Wales vs All Blacks series in a bar and chatted to a local who turned out to be a former rugby professional who played for London Irish in the ’90s. The following day we explored more charmingly decaying gold rush towns as we made our way to Dunedin and the Otago peninsula.

We spent our time in Dunedin enjoying the closest we had come to bustle in three and a half weeks. We visited the railway station (which locals proudly assert is the second most photographed building in the southern hemisphere after the Sydney Opera House), the excellent museum, Baldwin Street, the world’s steepest residential street, the Speights Brewery and the Cadbury Factory. 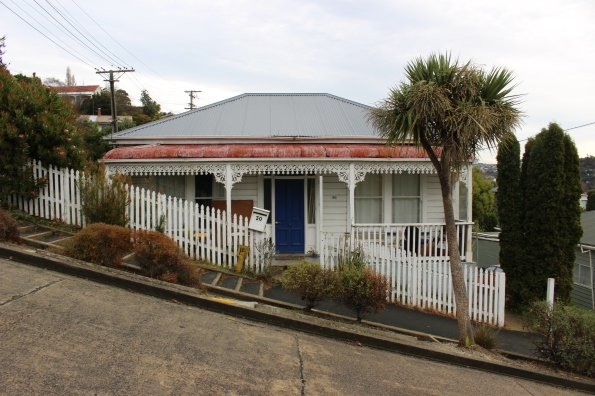 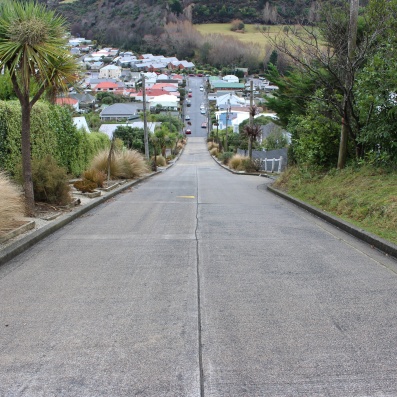 We wandered the Otago Peninsula for two days, enjoying more breathtaking scenery and looking for wildlife. We got drenched at the Royal Albatross Centre and may, possibly, have seen an Albatross away in the distance. On the beach below we spotted acouple of sleepy sealions and a dead blue penguin. Hopefully we will have better luck in the summer!

On the Saturday we were back in Dunedin to watch the third Wales vs All Blacks rugby test, which was being played in the city. Unfortunately we were too late to get tickets, but instead enjoyed soaking up the atmosphere in the ‘Octagon’ in Dunedin city centre, where marquees had been erected to accommodate a stage with live music, pop-up bars and food vendors, as well as the overflow from the more permanant establishments around the outside.

On a very wet and windy Sunday we drove up the coast to Oomaru, boasting a well-preserved Victorian Precinct and a truly bizarre museum dedicated to the Steampunk subculture, where sci-fi meets the age of steam. We then turned back inland and returned to Queenstown, where we spent one day skiing and one day snowboarding at the Cardrona ski field and did some more short walks.

With two weeks to go before starting work in Taranaki, we turned northwards and began to make our way up the west coast. This involved driving along the sides of two beautiful lakes – Wanaka and Hawea – before taking the Haast Pass through the southern Alps to the Pacific Ocean. Two days on the coast allowed us to see, albeit far too briefly, the Fox and Franz Josef Glaciers which, while shrinking at an alarming rate, still extend down into the native bush, just a few miles from the coast. In Hokitika we saw our first kiwi in the National Kiwi Centre (we will be very lucky to see one in the wild but we will certainly try!); and Hokitika Gorge, brilliant blue even on an overcast day. 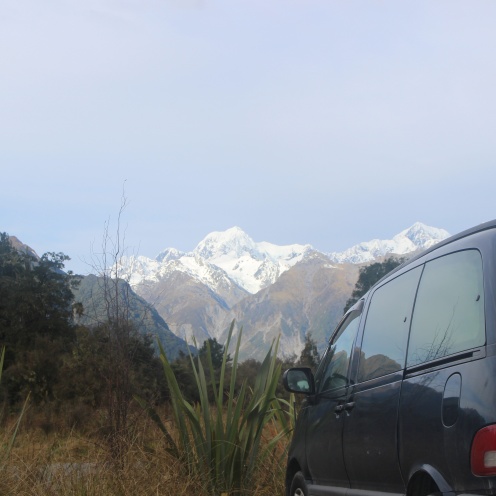 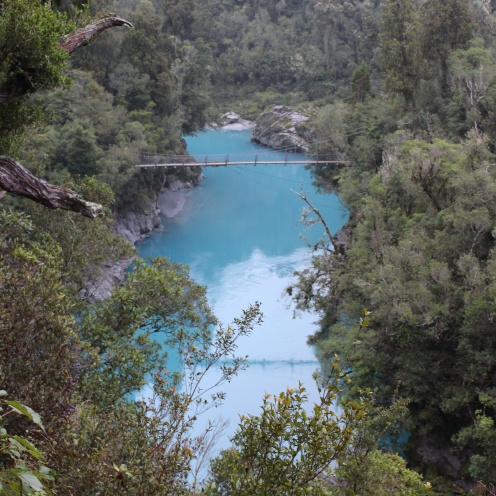 At Greymouth (Grey by name, grey by nature), we turned eastwards up the Buller Gorge towards Nelson and the Marlborough Sounds. After camping for a night right by the water in one of the many little bays in the Sounds, we joined the Pelorus Mailboat for a day, delivering mail – and anything else the ‘sea posties’ can fit in their boat – to those residents of the sounds without road access. (More on that to follow shortly). 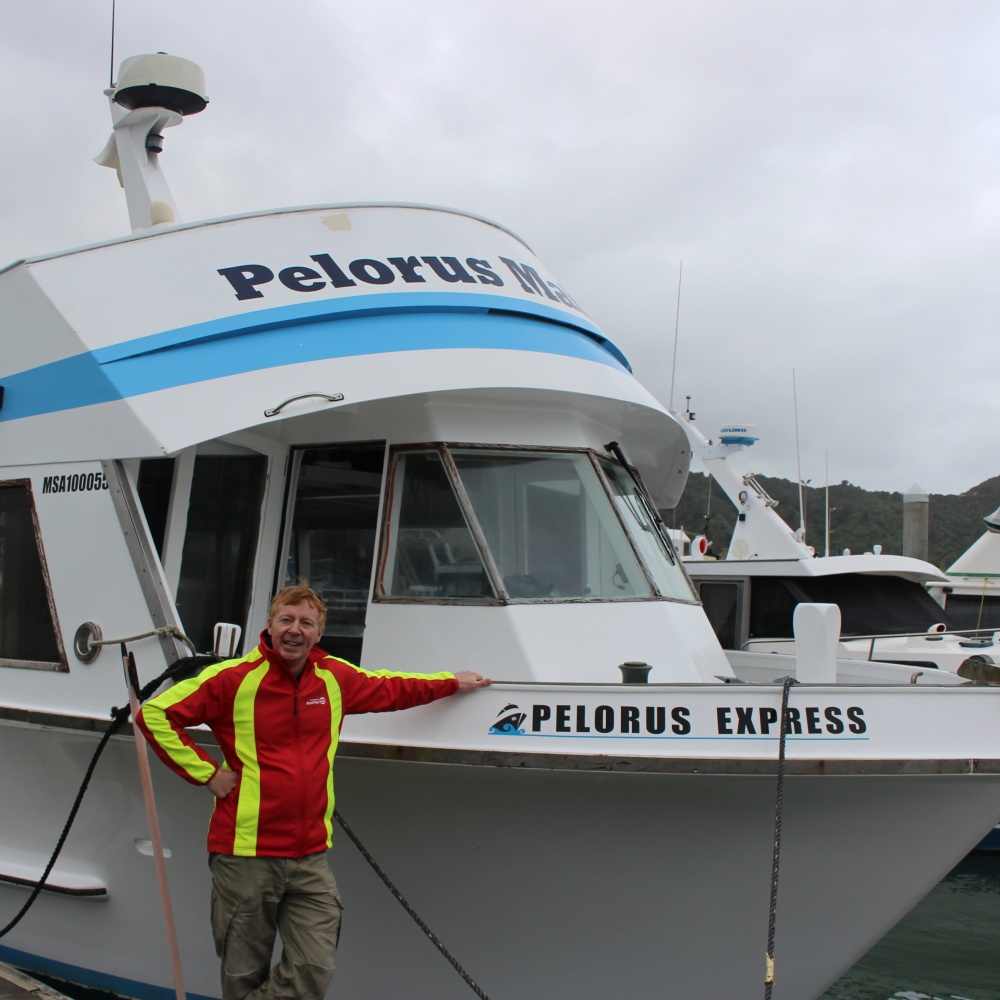 Next up was a day touring Blenheim’s vineyards and wineries, and sampling some of the produce, nicely rounding off our 40-day tour of the South Island. On Sunday 10th July we took the ferry from Picton, through the Queen Charlotte Sound, across the Cook Straight and into Wellington. 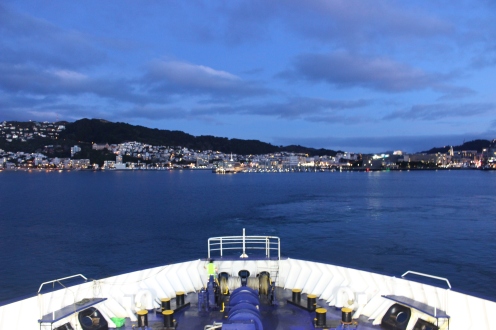 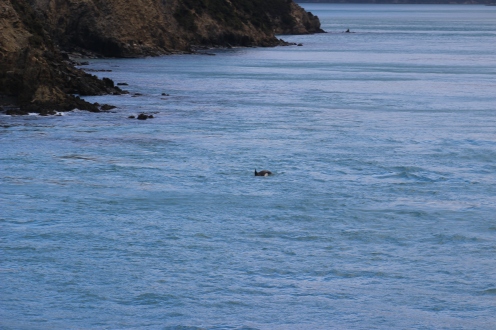 In Wellington we were very lucky to be hosted by Pete and Emma, friends from our ski season in France, who are now living in a lovely house in the city (the best feature of which is undoubtedly the private cable car negotiating the steep slope from front door to driveway!). We visited the excellent Te Papa national museum, whose current phenomenal Gallipoli exhibition is the work of Sir Peter Jackson and the Weta Workshop – the partnership responsible for the Lord of the Rings film trilogy. We also toured Weta Workshop itself, striking not just for the time, devotion and money that has gone into its many successful film projects, but for the time, devotion and money that goes into making props for films that never get made. 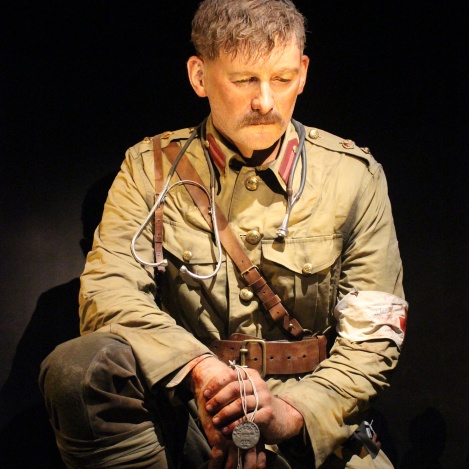 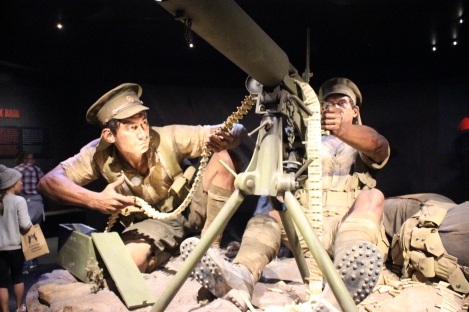 A machine gun team in the Te Papa Gallipoli exhibition 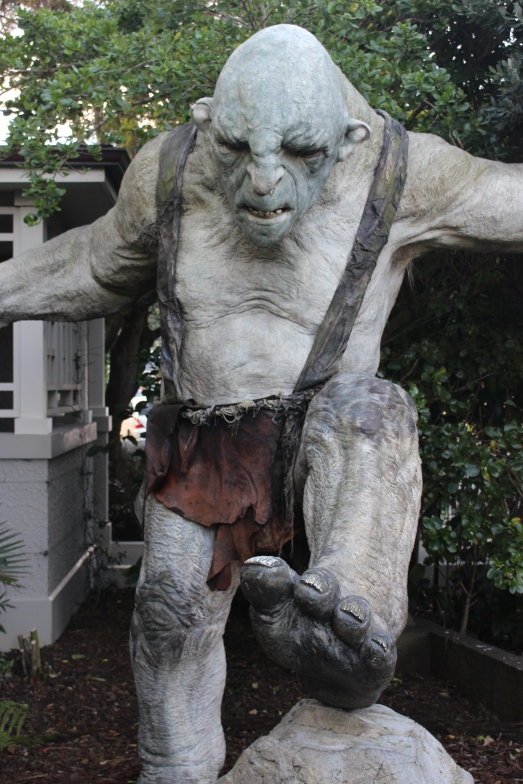 Troll guarding the entrance to the Weta Workshop

Our last stops on our way to Taranaki were Palmerston North, part of whose landfill site is dedicated to John Cleese after he made some derogatory remarks about the town; and Whanganui, which boasts the finest tunnel for shouting ‘echo’ in that I know of.

We are now living and working with a family on a farm near Patea, in Taranaki. Hamish runs the farm with the help of Jo, who also works part time as a vet. Gillian is working as an au pair for their two children, and I have just started a job helping remove the horn tissue of some of the 30,000-odd calves that the veterinary practice will ‘disbud’ this calving season. 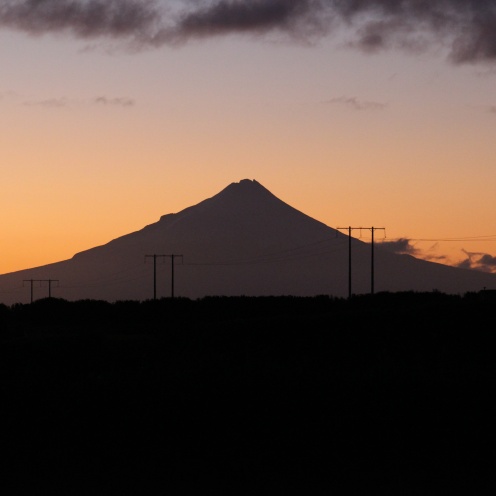 Mount Taranaki, from our bedroom window 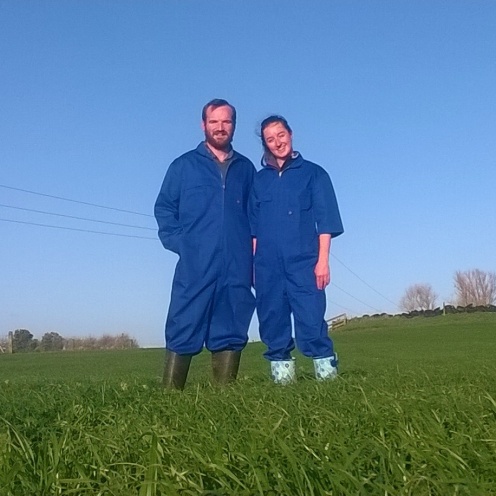 First day on the farm

So there we are…a whistle stop tour of our whistle stop tour. Most of what we have seen and done in our first 50 days in New Zealand deserves many more blog inches than it has been given, and I will get round to writing them before too long. In the meantime I hope this satisfies the thirst of our adoring fan.