Whether it can actually be seen from space or not, there is only one way to properly appreciate the Great Wall of China, and that is to stand on it. Better still, walk along it, or sleep on it. Even before you consider its age, length, purpose, or the number of people involved in building it (many of whom died in the process and are said to be buried within it), it is pretty awe-inspiring to stand up there, following the wall with your eyes, over and around hills, until it disappears from view.

The Wall is easily accessible from Beijing, so it was the first thing on our ‘to do’ list after we booked our flights. There are several options, depending on what you are looking for: the most accessible sections are also the busiest; some sections have been fully restored to their former glory, while others have been left to crumble; some are perfect for hiking, whereas others are too steep or lack the continuity for a good walk.

We chose a section near the village of Gubeikou, and would strongly recommend it. It is not the easiest to get to, nor the quickest, but it is quiet, rugged and beautiful. We went twice: the first time we didn’t see another soul on the wall the whole time we were there. The second time we passed a couple of small tour groups, but it was nothing compared to the tourist hoards and souvenir stalls that frequent the Wall closer to Beijing.

There are, according to most sources we found, three main options for walking the Wall from Gubeikou. One takes you up the steep ridge of the Crouching Tiger mountain; another forms a loop around the Coiled Dragon – a dog-leg in the wall on which sits three watchtowers – and back to the village. A third follows the wall past the Coiled Dragon to the restored section of wall at Jinshanling.

Having successfully navigated the public buses from Beijing to Gubeikou, we settled on the Coiled Dragon loop. We then spent some time wandering around the village and surrounding area trying and failing to follow the scant directions contained in Lonely Planet to the start of the walk. There are next to no English signs in Gubeikou and fewer English speakers – which is nice, but which meant we wasted quite a bit of time exploring dead-end tracks and roads.

Eventually, by following a dirt track through some woods, and scrambling up a very steep bank we found ourselves standing on the Great Wall of China, and after another ten minutes we were standing at the restored gate which was the start of our walk (and which would have been painfully obvious to us straight off the bus if we had only looked behind us!).

That first day we were on the wall itself for less than two hours – not nearly long enough to overcome the sense of awe that comes with standing, entirely alone, on something so old, so famous and so utterly magnificent. We decided there and then to come back again, to walk further and to camp on the Wall.

Our intention, two days later, was to get the bus to Jinshanling, a restored section of wall, and walk to Gubeikou (about six hours, according to Lonely Planet), camping somewhere along the way. Having crossed Beijing to get to the right bus station, we discovered, by means of gestures, pointing at signs and basic and grotesquely mispronounced Mandarin, that the bus to Jinshanling had been cancelled. We recrossed the city and took the bus back to Gubeikou.

From there we started walking along the wall towards Jinshanling, knowing we would not now have time to get all the way there and back. To our great disappointment, we had to share the wall that day with a couple of small tour groups and some locals, who use sections of the wall to get between neighbouring villages. We even passed an official who charged us the ¥65 (about £7) entrance fee. About half way along a military camp necessitates leaving the wall for an hour or so, so we stopped for lunch in a watchtower, then started back towards the tower that we had already identified as our campsite.

We picked our watchtower (Jiangjun Tower, the third of the Coiled Dragon section) for its view, its largely extant roof and walls and its reasonably smooth floor. There are plenty of other, possibly better options, further from the village, but we had to get an early bus back to Beijing early the next morning so camped half an hours’ walk from Gubeikou.

Now, sleeping under the stars on the Great Wall of China seemed a wonderfully romantic notion, but in the end it was not quite as relaxed as we had envisaged. Camping on the wall is not uncommon: we got the idea from a guidebook, and it is a fairly common feature of commercial tours. It is, however, strictly speaking, illegal, and we are not natural lawbreakers. Despite knowing that it is a rule largely unenforced, especially on such remote stretches of the wall, we were somewhat nervous. 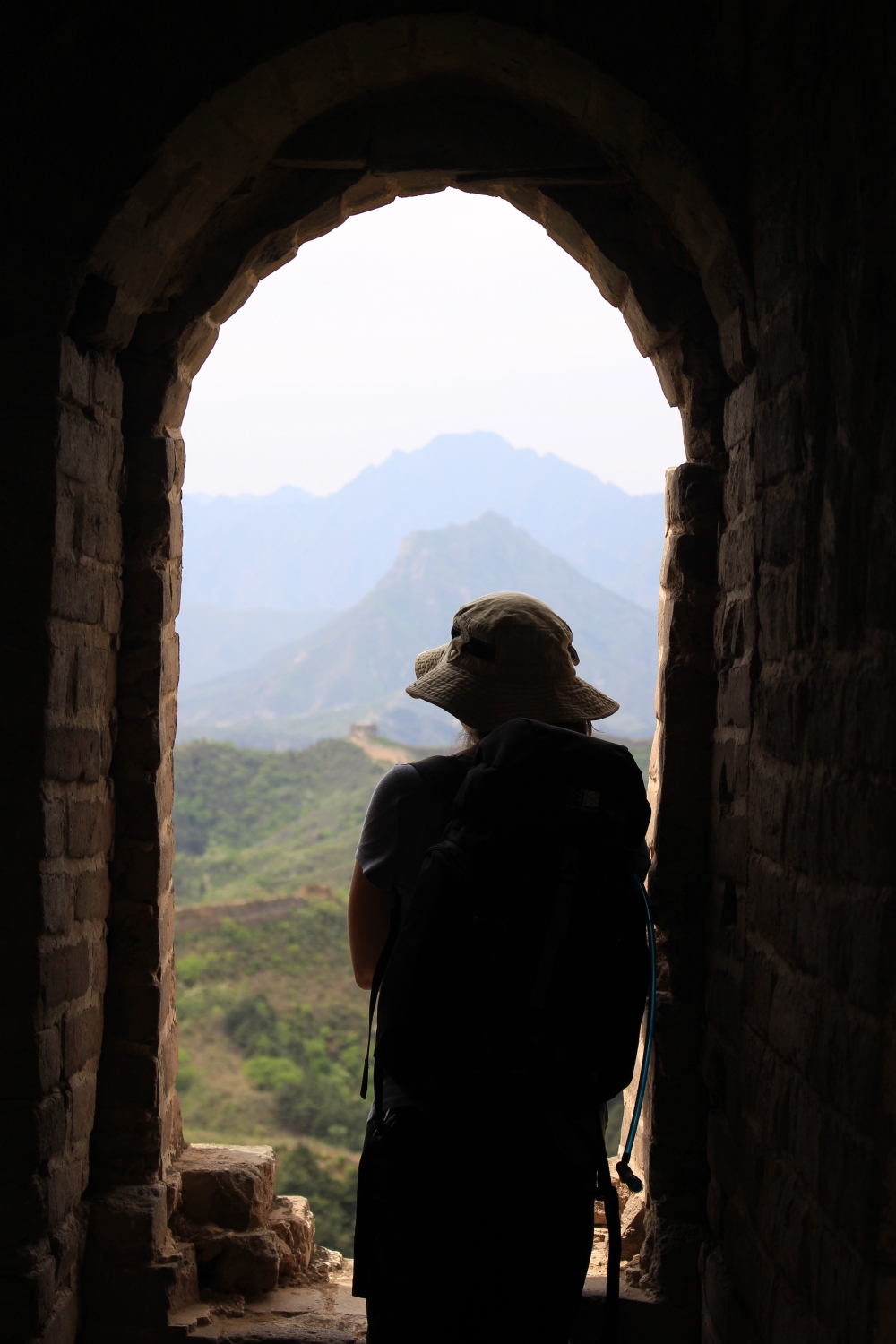 The official to whom we had paid our fee hung around until about 6pm, and appeared to us to be watching us and waiting for us to leave, making us uneasy. After he had gone our disquiet eased and we had dinner (a selection of snacks, since we had no cooking equipment, and a can of Tsingtao), tried and failed to fly the cheap kite we had picked up in a market in Beijing, and settled down to enjoy the sunset.

Shortly after dark, around 10pm, we spotted some torches moving along the wall towards us. I tried to tell Gillian that spending a night in a Chinese police cell would make a cooler story than spending a night on the Wall, but she wasn’t convinced. We moved our stuff on to the top of the watchtower and lay low.

The four torches and accompanying voices spent some time in the tower two down from ours, came along the wall, and passed through the bottom of the tower on whose roof we were hiding, appearing to have a good look round as they went. They continued a while further, before stopping for half an hour or so, chatting, laughing and swinging their torches around, then retracing their steps back to the village. We, meanwhile, were laying flat on the roof, holding our breath.

As they were returning to the village I stole a glimpse from our hiding pace, and am fairly sure that they were not in uniform and were carrying backpacks – in short, that they were probably local youths finding a spot for a couple of beers and some star-gazing, and that we should have greeted them and had a drink, rather than cowering on the roof.

We spent a fairly restless night, thanks to the rough stony floor of the watchtower and Gillian’s paranoia, but were up on the roof again at 4:45 to watch the sunrise.

We enjoyed our night on the Wall, and anyone with a slightly more daring and rebellious nature than ours would probably have an even better time. The only camping equipment we took were very cheap sleeping bags we picked up in Beijing. We were plenty warm enough (in May) and if you pick the right watchtower you can find ample protection from wind and rain. A small roll-mat would have been a welcome addition, however.

As mentioned above, we didn’t find Lonely Planet’s instructions immensely helpful, although they have since brought out new edition. Hopefully this may help:

Gubeikou is split in two by a ridge with a tunnel through it. Try to get off the bus before the tunnel (we failed both times and had to walk back through), at the entrance archway to the Folk Customs Village. Here you will find various guesthouses and eateries. Walk under the archway and into the village, until you find a street on the left leading up to the Gubeikou Gate.

Just before the gate on the right hand side are some new stone steps, leading to the top of the gate, and a path leading up the hillside. Following this will lead you after a few minutes to the Wall. There may be some red paint dots on the path, left over from the Great Wall Marathon. Follow the wall until you get to three watchtowers. We camped in the third. To get back down to Gubeikou, take either the path leading away from the base of the watchtower to the right, or follow the wall another hundred metres or so until you reach a better made path leading off to the right. Both lead back to the village.

We took our lead from Lonely Planet:

From Beijing’s Dongzhimen Transport Hub (on subway line 2 and 13), take bus 980快 (fast) to Miyun bus station (the last stop, around 90 minutes). Leave the bus station, cross the main road and walk a short distance away from the junction to find the stop for bus 密25 to Gubeikou (about 70 minutes). The 980快 runs almost constantly, the first leaving Beijing at 6am, the last leaving Miyun at 7pm. The 密25 runs hourly, the last leaving Gubeikou at around 5.20pm.

Since there is no English on the bus, we found it helpful to have maps downloaded on our phones (Maps.me is good), so that we knew when we were approaching Gubeikou. Otherwise, show someone the Mandarin symbol for Gubeikou, and hopefully they will help you out!

The first time we took the journey we were not paying attention, and when a friendly local told us we were at the right stop for the Great Wall we believed him, up until the point at which he tried to get us into his taxi. Luckily there is a constant stream of 980 buses between Beijing and Miyun, so our mistake didn’t cost us too much. It will be obvious when you have arrived at the bus station, do not listen to anyone who tries to get you off early.

Since Gubeikou is within the Beijing area you can use your Beijing travel card (tap on, tap off) for dirt cheap bus travel – the three-hour journey cost us around £3.