Jim Baillie thinks that he has the best job in the world. I think he may well be right. Three times a week he takes his boat out of Havelock harbour to deliver mail, groceries and gossip to the residents of the remote corners of the Marlborough Sounds. Apart from cruising around some of New Zealand’s most spectacular scenery, he often finds time on his round to follow a pod of dolphins or orcas, go for a short bush walk or just have a chat with the locals who come to meet him on their jetties.

Since 1918 tourists have been able to join the Pelorus Mailboat on its rounds, and a few weeks back we did just that.

Up until 1918, the farming families in parts of the Marlborough Sounds too remote even for road access would get their mail by rowing out to meet the mail steamer as it passed through the Sounds to Havelock. Each tiny community or individual farm had its own postmaster responsible for the mail. This proved too costly a system and so in 1918 the service was put out to tender and the Pelorus Mailboat was born.

The contract offered by the New Zealand postal service to deliver the mail was not sufficient to cover the costs of running the boat, but the enterprising postmen realised that they could supplement their earnings by offering other services. They were soon operating as a ferry for residents as well as delivering building materials, groceries, livestock and other freight. They also realised that, since their delivery route was pretty scenic, there may be tourists willing to pay to accompany them on their round.

Today the Mailboat service is heavily, though apparently comfortably, reliant on tourism. Accordingly, the boat is kitted out with a PA system, information booklets and historical scrapbooks and, time and weather permitting, will make a detour to tour a mussel farm or follow a pod of dolphins. Jim, a Scot who came to New Zealand as a backpacker and stayed, bought the business seven years ago. He is proud of the fact that in that time he has only failed to deliver the mail on one occasion, in particularly bad weather, when they had to turn back due to the sea-sickness of their passengers. He and his assistant Bindy double up as postal workers and tour guides, pointing out the local flora and fauna and telling stories of the Sounds and their inhabitants as they cruise around the bays.

None of the homes on the Pelorus Mailboat’s round have road access. Most of them have no mobile phone reception, though most now have a landline and dial-up internet. Many are not connected to mains electricity and have to generate their own. The combination of these factors results in a very different style and pace of life for the Sound’s inhabitants.

We heard, for example, about the Foot family, who have been farming in the Sounds for six generations, since 1881. Their 1700 acre sheep farm is more or less self-sufficient, with power from a home-made hydro-electric generator fashioned out of an old washing machine. Kelly, whom we picked up on the way back into Havelock, married the current farmer, Trevor, 22 years ago and has lived in the Sounds ever since. She talks about some of the challenges of bringing up children in such a remote spot, but has no regrets. The children, both under 10 years old, are home-schooled, going into the ‘local’ school for just one week each term. With the eldest now approaching high school age, Kelly is trying to increase the frequency of their visits to town to give them more exposure before they start secondary school, aiming to get in once or twice a month. 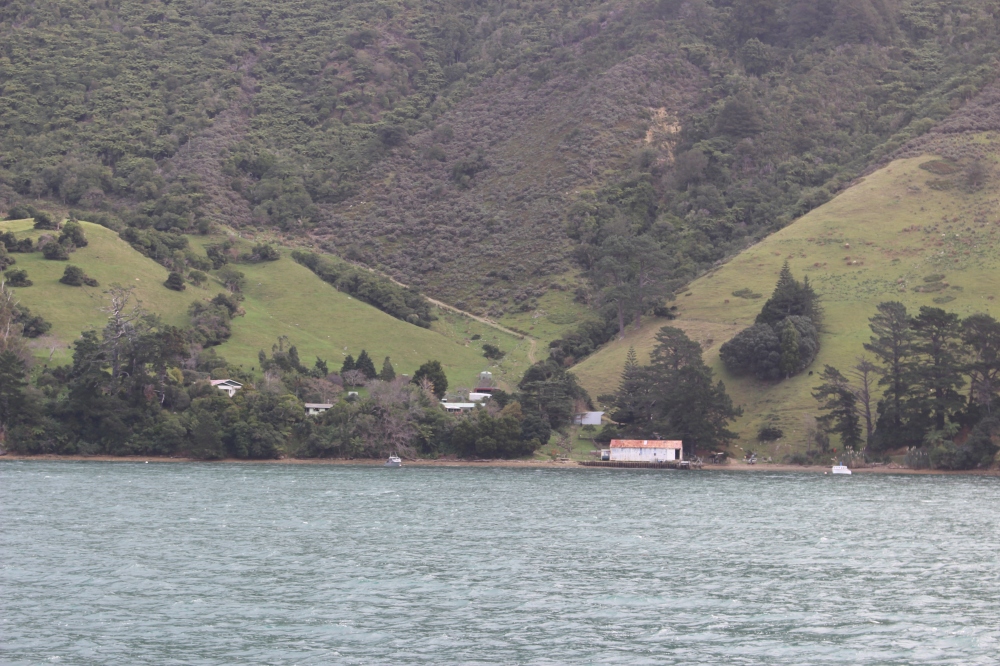 The Foot children do not often get the chance to play with others their own age. Maud Island, home to another family with young children, can be seen from the top of the Foots’ farm, but they very rarely get to play together. Maud Island is a predator-free nature reserve, whose strict quarantine protocols make visiting the mainland or receiving visitors an even greater hassle.

Trevor Foot’s grandmother, Emily, is used as an example as Jim tries to describe life in the days before ready access to motor-boats and water taxis. Emily used to row the 18 miles into Havelock when she needed groceries, a journey which, with prevailing wind and tidal conditions, could be done in a day. Others who lived further afield would have to stop half-way and spend the night under their upturned boats.

Access is easier now, but families still aim to be as self-sufficient as possible, often restocking pantries and freezers only once every couple of months. In this the Sounds inhabitants are able to help each other out. The Mailboat offers a free ‘internal mail’ service, whereby Jim and Bindy will pick up milk and eggs at one jetty to take round to the neighbours at the next. The same service is also used to help wandering livestock on its way back home.

The population of the sounds is ageing, and accordingly the Mailboat has begun to serve another purpose – checking up on elderly residents. With limited mobile reception, and landline and dial-up internet frequently failing, concerned relatives will sometimes phone Jim, who is only too happy to make a detour to check in.

Jim recalls a time when Bill, aged 89, failed to meet the boat on his jetty. Bill, whose great-great-grandfather started farming in the Sounds in the late 19th century, lives alone in one of the most remote spots on the Mailboat’s round. Once or twice a month he single-handedly sails his yacht out of the Pelorus Sound into the Cook Straight and back round into the Queen Charlotte Sound in order to visit his wife, Pat, who now lives in a care home in Picton. When he has withstood the fast-paced town life for as long as he can, he sails back to his home in the beautiful solitude of the Sounds. On this occasion, it turned out, Bill had pulled up alongside a friend’s jetty on his way home and had one too many whiskies, ended up staying overnight and missed his mail delivery the next morning.

There are, however, young families buying property in the Sounds, either to live in or to use as a holiday home, or ‘bach’. Matt, in his early twenties, is using the Mailboat to get out to his family’s bach in the Sounds for a few days’ break from his job in Auckland. While there he will continue his work trekking through the woods behind the house poisoning the non-native pines, whose introduction into the Sounds has been a by-product of the logging industry, which is beginning to leave its mark in some of the bays. 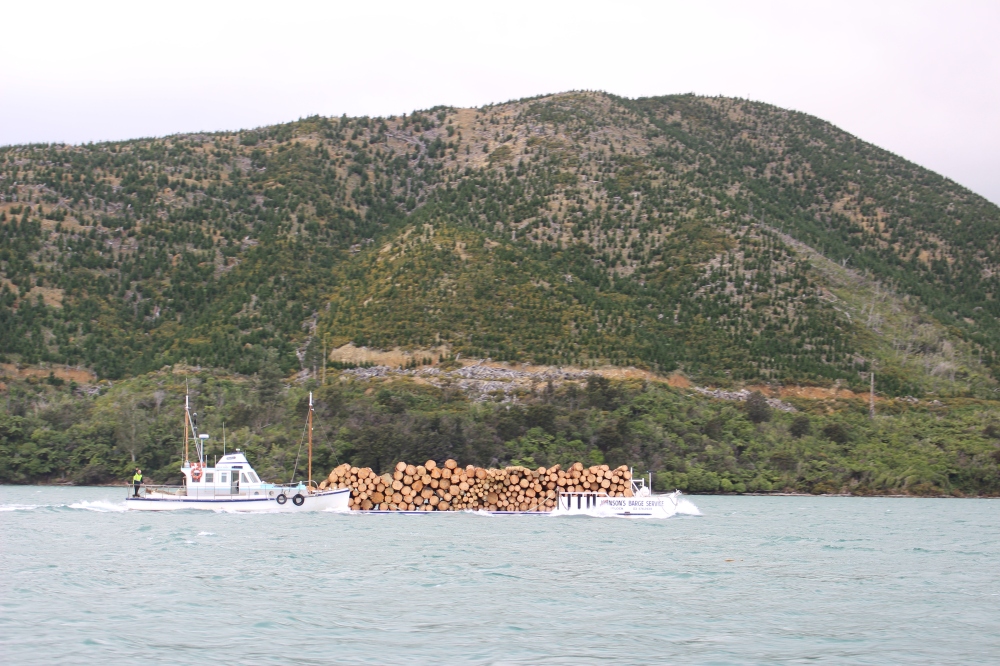 A pair of French brothers recently bought a plot in the Sounds and had their state-of-the-art eco-cabins pre-assembled and airlifted into position. On ‘moving in’ day, the weather took a turn for the worse and, with the helicopter at maximum lift capacity, the pilot apparently had his finger on the ‘drop’ button for most of the flight, ready to consign his multi-million dollar cargo to the sea at a moment’s notice. Luckily both cabins arrived unscathed and now command incomparable views, while blending into the scenery. 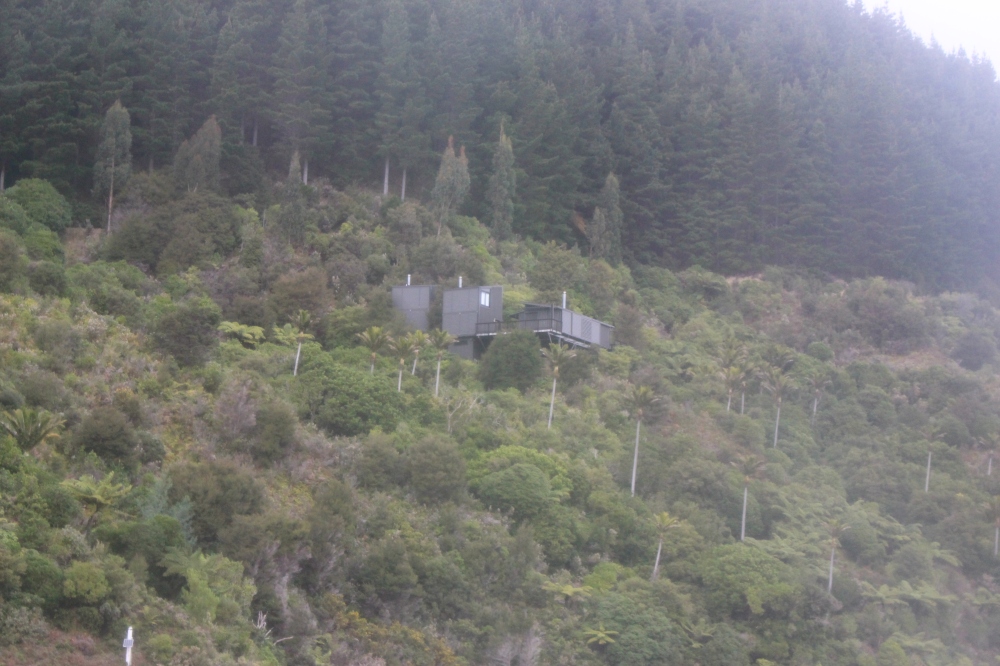 In all some 200 families live in the Sounds, but they see each other with decreasing frequency. In the 1960s the Community Hall was one of the most-used in New Zealand, with meetings for farmers, women’s groups and home-schooling discussions. The availability of internet has reduced the need for these. One thing which has survived is the Pelorus Sound sports day, which has grown from 50 participants at its inception in 1920, to over 1000 last year. Events include a Kiwi classic: gumboot throwing.

The Pelorus Mailboat, too, has survived modernisation – or the Sounds’ version of it – and the age of internet does not seem likely to threaten its existence. It provides many vital services for residents, as well as a fantastic opportunity for visitors to explore the Sounds from a unique perspective.